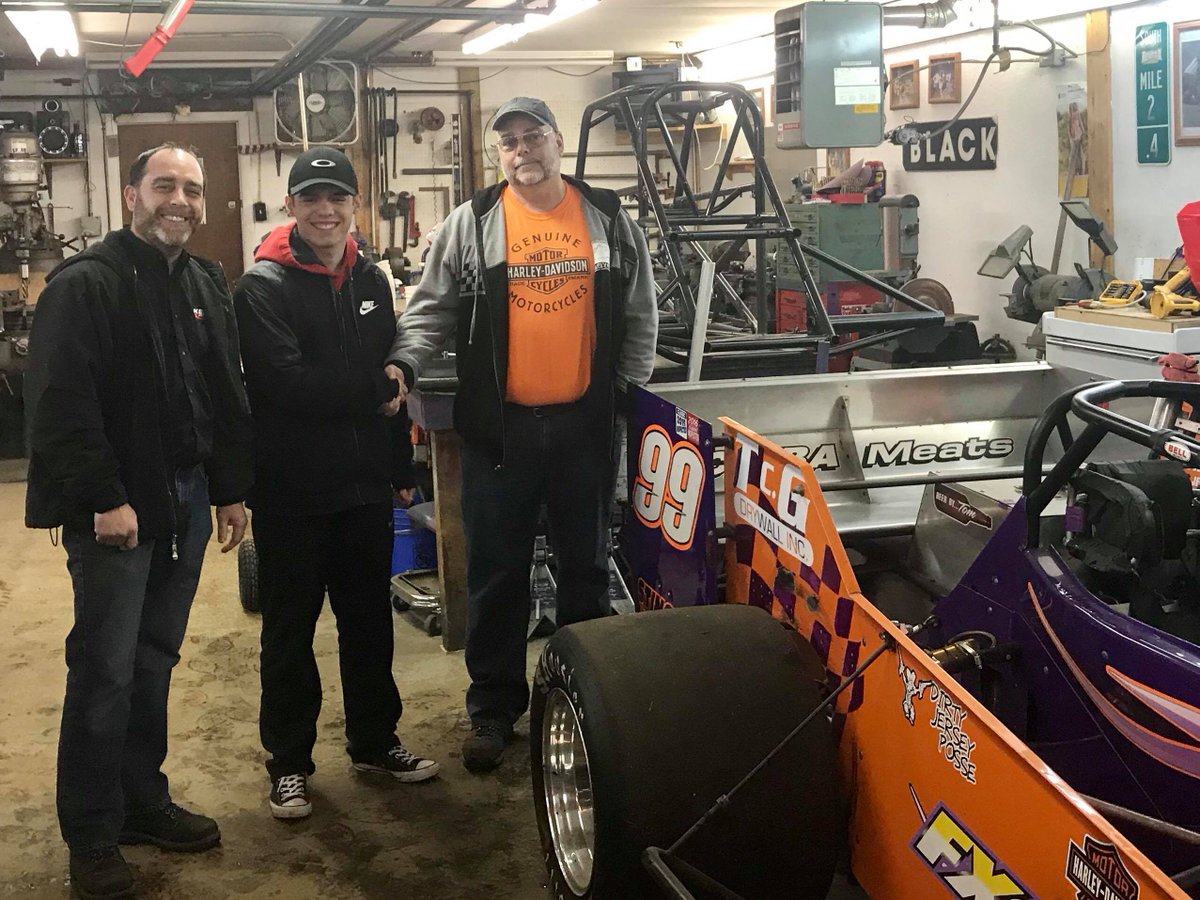 OSWEGO, NY (March 17, 2018) - Yet another Small Block Supermodified veteran is set to make the move up to Oswego Speedway’s premier division as Proud Motorsports and driver Camden Proud have acquired the Strong Racing No. 99 Supermodified which was last in competition on Classic Weekend in 2016.

The 2010 Hawk Chassis has been driven to two Oswego victories by Michael Barnes in 2012 and has more recently been piloted by Dave Cliff and Joey Payne with Payne notably bringing the orange and purple racer home on the podium in the 2015 Budweiser International Classic 200.

Proud, the 19 year-old former SBS Rookie of the Year who finsihed third in last season's point standings with seven top five finishes, explained how his family came to the big decision.

“Over the winter my Dad and I have talked an awful lot about the next steps we wanted to take in my career and this is the conclusion we came up with,” Proud said. “It started off with some interest in running Super DIRT Week and maybe getting a dirt Sportsman. Then we went to Pat and Terry (Strong's) to look at their West 4-Bar for a 350 Super and that was when the big block caught our eye.

Since December, the Proud family have been involved in discussions to purchase the car and after months worth of careful deliberation, the deal was finalized this past week and the No. 99 was rolled into Proud Motorsports’ shop in the City of Oswego.

“We’ve been trying to get a deal done for a while now," mentioned Proud. “We are a very low buck team and the ultimate goal has always been to move up to the Supermodified class for the right price. With the SBS division in transition to crate motors, our engine has to go up for sale after this year and we figured it was the perfect time to make our move."

It has been a lifelong dream of Camden's to be able to move up to the Supermodified ranks, and now a dream that will at long last become a reality in 2018 as the teenaged pilot looks forward to attempting his first Budweiser Internatonal Classic this September.

"I'm on cloud nine right now," offered Proud. "Fielding our own Supermodified was something I never thought to be possible, let alone with a car that has been a proven winner in the past. We have had a lot of encouraging input and I think this will be a great starter piece for us. I am beyond grateful for my family and sponsors who have stepped up tremendously to make this happen and so excited to shoot for the Classic this Fall."

Although the No. 54 Small Block Super will have to take the backseat for Proud's first full-time crack at Supermodified action in 2019, plans call for both the Supermodified and the SBS to see track time this season. Following several track testing sessions, Camden intends to pull ‘double duty’ on an occasion or two leading up to the 62nd running of Budweiser International Classic Weekend.

“We did not just buy the car to let it sit in the shop, so we will definitely be bringing it to the track a few times in 2018 to see what we’ve got,” Proud said. “It’s going to take time. Pat (Strong) is planning to help us out, we’ll have Joey Hawksby and all the right people take a look at it. Everything will be gone through meticulously to ensure its good to go. It’s really just a week to week operation at this point and we'll take it from there.”

Proud’s goals this season with the Supermodified are to log laps, get lots of seat time, and more importantly than anything else, get acclimated and adjusted behind the wheel of what is an entirely different race car compared to anything he has driven in his career.

“It’s a totally different ballgame,” Proud explained. “My Oswego experience is there, but it is going to be an immense learning curve for us and to be honest, if I can just keep the car in one piece, earn respect of my fellow competitors, and learn every time we're on the track this season, then I would say that is certainly a success. I grew up idolizing these guys that I’m going to run side by side with. It's just a really special deal for me.”

Oswego Speedway kicks off its 2018 campaign on Saturday, May 26 which will see the track’s 68th annual Opening Day set to include Jim Shampine Memorial Twin 50’s for the Novelis Supermodified division plus the Tony White Memorial 35 for the Pathfinder Bank SBS. To purchase tickets, please call (315)-342-0646.